This is the second blog in our blog series where we dive deep into the CNCF Sandbox. In our last post we showcased KubeVirt to run a Kubernetes cluster within a Kubernetes cluster. This time we’ll be exploring how to integrate chaos engineering into the test suite of our Helm charts with LitmusChaos.

Litmuschaos makes this possible by extending the Kubernetes API with additional Custom Resource Definitions (CRDs) that can be used to create, manage and monitor the chaos experiments. The three main CRDs are:

Along with these CRDs is a Litmuschaos Kubernetes Operator that will search for active ChaosEngines and will invoke the ChaosExperiments declared in the engine.

This demo will be using one of the provided experiments to fail an application’s pod as part of a Helm chart test suite.

When you package your Kubernetes application into a Helm chart you may also choose to include a test suite for the Helm chart to validate your deployed Helm charts.

A good use case for this is to perform a health check against your Kubernetes application (deployed via a Helm chart). However, imagine you have an application that is fully functional when it’s initially deployed but loses some (or all) of its functionality when a disaster strikes. For example, can we be confident that our application will still be fully functional if a pod crashes and restarts?

Before going over the implementation details, I want to provide an overview of the workflows we’ll be combining, followed by the new workflow.

Assuming the litmuschaos operator is deployed, the workflow of a chaos experiment (via terminal only) is as follows:

Note: Deployments can be done with the kubectl apply -f command 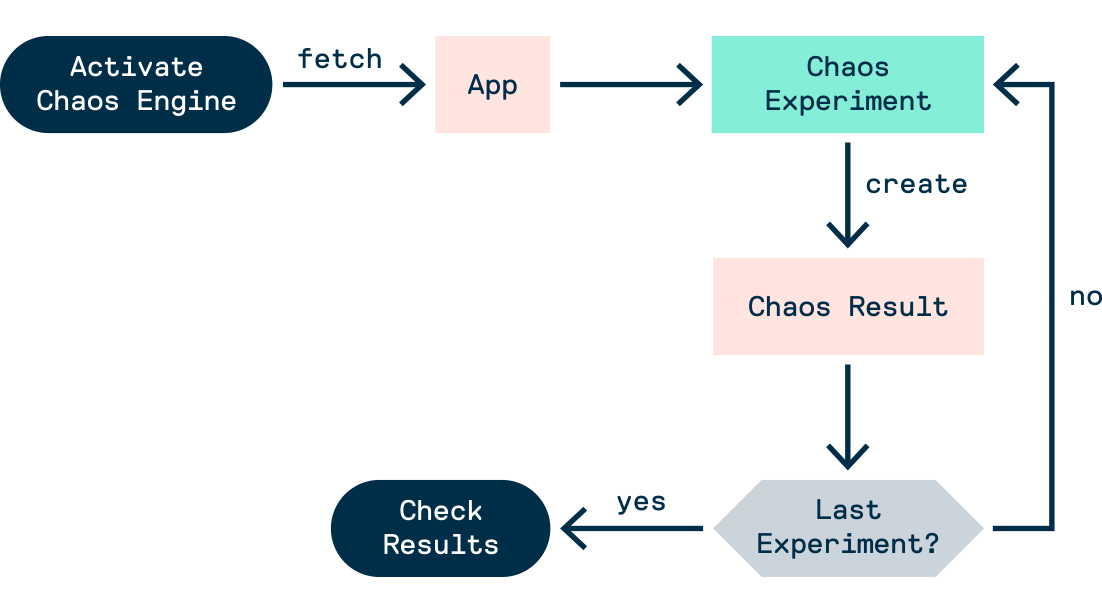 Packaging the chaos experiments into a Helm chart test suite will improve this workflow. Some benefits include:

Now, we’ll go over the workflow for a Helm chart test suite.

Tests in a helm chart live in the templates/ directory. Therefore, when creating a helm chart we need to create a template for a Pod and Job with the helm.sh/hook: test annotation. This annotation declares that the manifest file should be run/deploy when it’s time for Helm’s test hook to be invoked, which is when the helm test command is run.

The workflow for running a Helm test suite is: 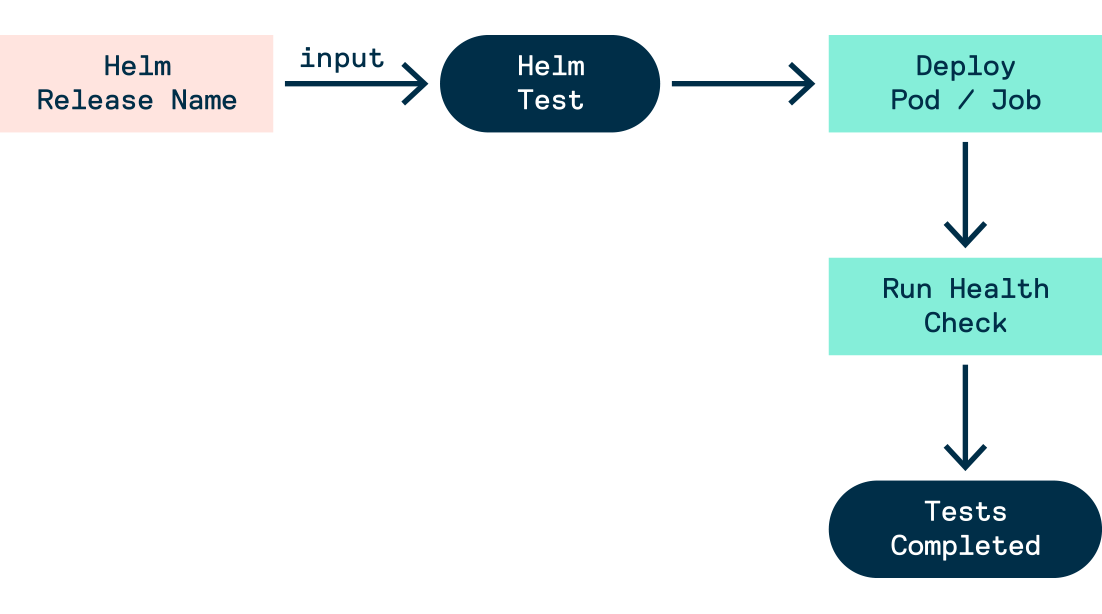 With chaos experiments, the result of the experiments can be used to determine how the container should terminate.

When we package LitmusChaos experiments into a Helm chart test suite, we can achieve the following workflow:

Now the question is how do we create this new workflow?

With the prerequisites set up, we now need to define the container within the Pod/Job that will execute the tests. The tests will be in one bash script and will involve repeatedly running the curl command against the kubernetes.default.svc DNS name, which is the recommended approach to querying the API within a pod. With these curl commands, we’ll be able to patch and query the ChaosEngine.

The URL follows the convention https://kubernetes.default.svc:443/apis/$GROUP_NAME/$VERSION/$NAMESPACE/$RESOURCE_TYPE/$RESOURCE_NAME

The output of the curl command would be a description of the deployed ChaosEngine - which includes the engine status, the chaos experiments and the results of the experiments.

To start the experiment by patching the ChaosEngine we’ll need to modify the curl command to:

An example is below:

To stop the ChaosEngine you would set the value to stop instead of active.

Now that we’re aware of how to get a pod to query and patch the ChaosEngine we can define the following algorithm for our tests:

You can find example code for this (and the helm chart) here. The gif below is a demonstration of the workflow in action.

The experiment would take at least a minute to complete, so the gif was cut short. In the gif, you saw the logs for the tests were in the helm-test-chaos-reporter pod. If you used the --logs flag with helm test the logs will be shown as the output (alongside other details) of the helm test command once the test either passes or fails (The image below shows the tail end of the output). 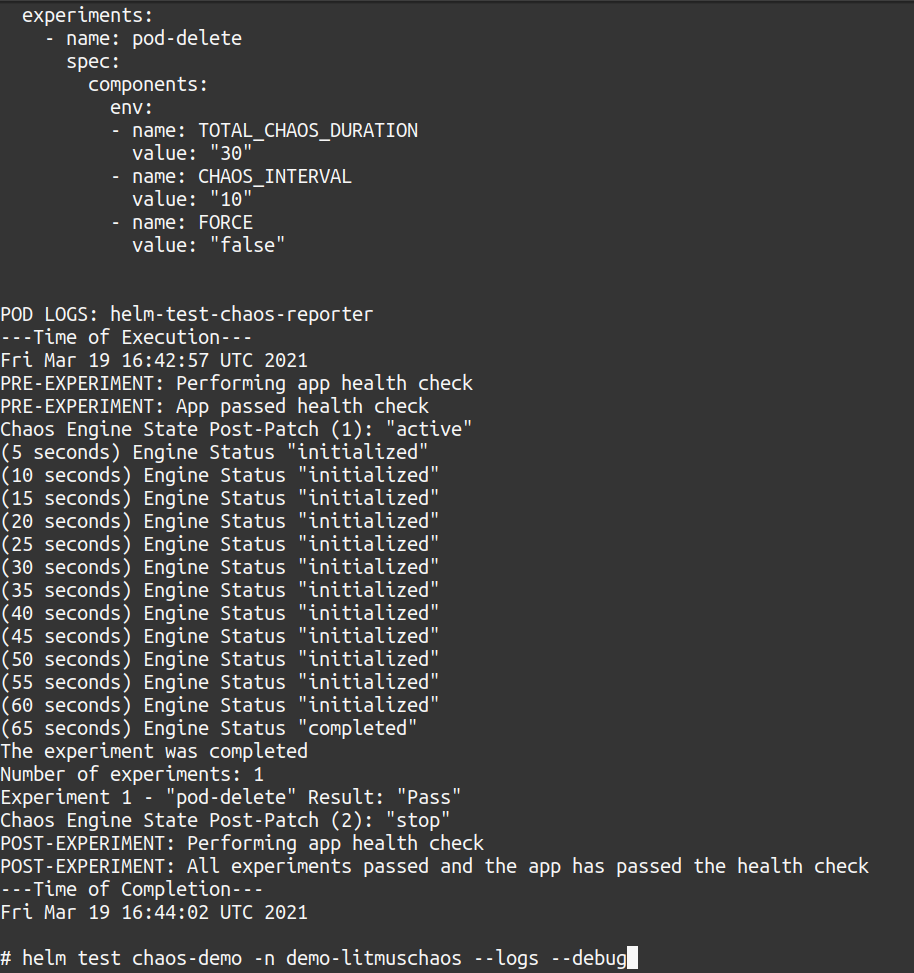 This is as far as we’re going to go with LitmusChaos today, but by combining LitmusChaos with Helm we’re able to easily configure chaos experiments for specific Helm charts/releases (i.e. Kubernetes applications) and run them.

With this approach and the right chaos experiments Helm chart maintainers will be able to create a test suite to confirm the resilience of the Kubernete application deployed as part of a Helm chart and include this test suite within a CI pipeline that’ll be able to provide ample feedback to developers.

We’re looking forward to integrating this new workflow in our internal projects and exploring the other CNCF sandbox projects.

Other posts in this series

KEDA Showcase: Autoscaling Based on Prometheus and Redis