In the past, pushing your application from development into a production environment was a nightmare. Deployments would fail as developers would forget an obscure dependency that crept in to the project months ago, and provisioning a new machine with the correct environment could take hours! The world of technology moves too fast for this to be acceptable, so in recent years, the "DevOps philosophy" has emerged, a process where both development and operations engineers take part in the whole product life cycle. One of the questions that has emerged from this school of thought is, "Why can't I push the app I've been testing on my personal machine straight into our production environment?" A number of tools have emerged to try and fulfil this need, and we'll be looking at Docker in this post.

Docker is a lightweight container virtualisation platform, originally based on LXC, but it now uses libcontainer. In a nutshell, Docker provides process, file system and network isolation between processes by leveraging the namespaces feature of the Linux kernel. As a full-blown hypervisor is unnecessary, containers are extremely quick to create and have virtually 0 overhead.

Containers are useful because they vastly simplify deployment. In the past, deploying meant packaging your application, specifying a list of dependencies, and then having to rely on the target server's package manager to create a working environment. This generally leads to problems down the line, as a library update initiated by your security team breaks your app and you suddenly have to debug a live server remotely. With containers, you package your entire app into 1 unit. This unit will run in an identical way on any host it is deployed on, meaning that pushing your app to production is just 2 or 3 commands.

While you can manage containers manually using LXC commands, Docker adds a number of neat features that make it worth using: 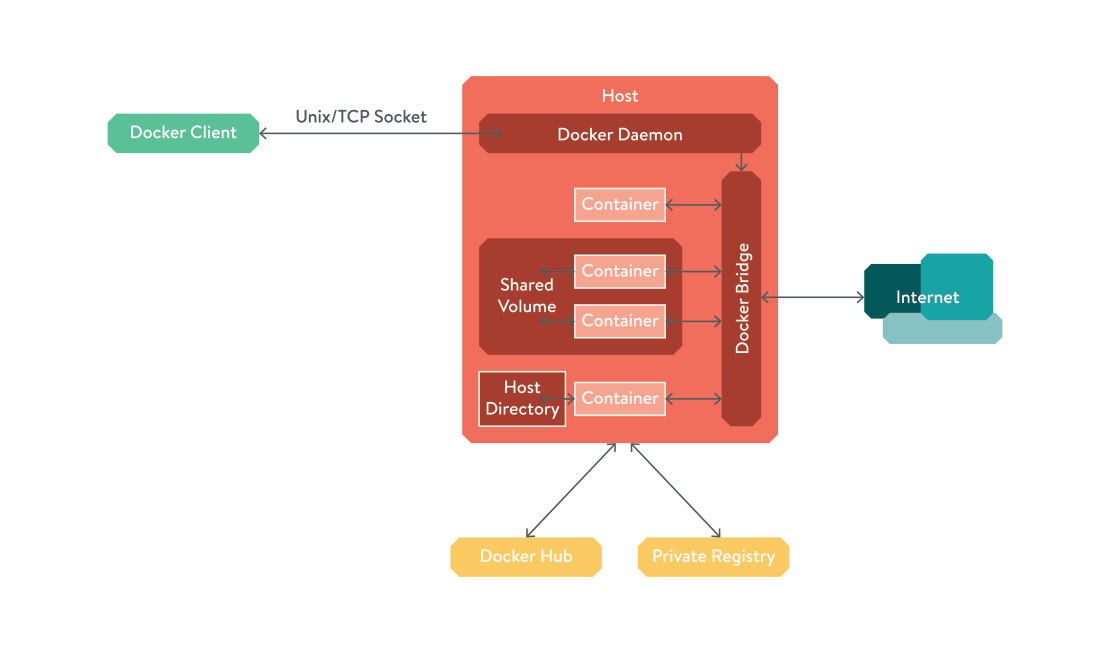 Packaging an application for deployment goes something like this:

Step 5 can be easily done over SSH when you have a single instance, but what if we want hundreds? One of the benefits of containers is they are discrete units with no external dependencies, so we can easily scale them up. Introducing...

Apache Mesos is a project that turns a group of interconnected servers into one abstract block of resources, with optional amounts of redundancy coordinated through Apache ZooKeeper. In production, you would run 3 or 5 masters, depending on whether you want to tolerate 1 or 2 consecutive failures, and as many slaves as you felt the need to. If you need more resources, simply spin up more slaves, and turn them off again when you no longer need them. As machines are paid for by the hour, you can keep costs low while also having the ability to scale quickly under a sudden influx of traffic.

Mesos is made up of 3 key components:

The mesos master will periodically make resource offers to any registered framework, and the framework's scheduler can choose to accept it and launch a task. In our case, we will be using the Marathon framework to launch docker containers, so our whole system will look something like this: 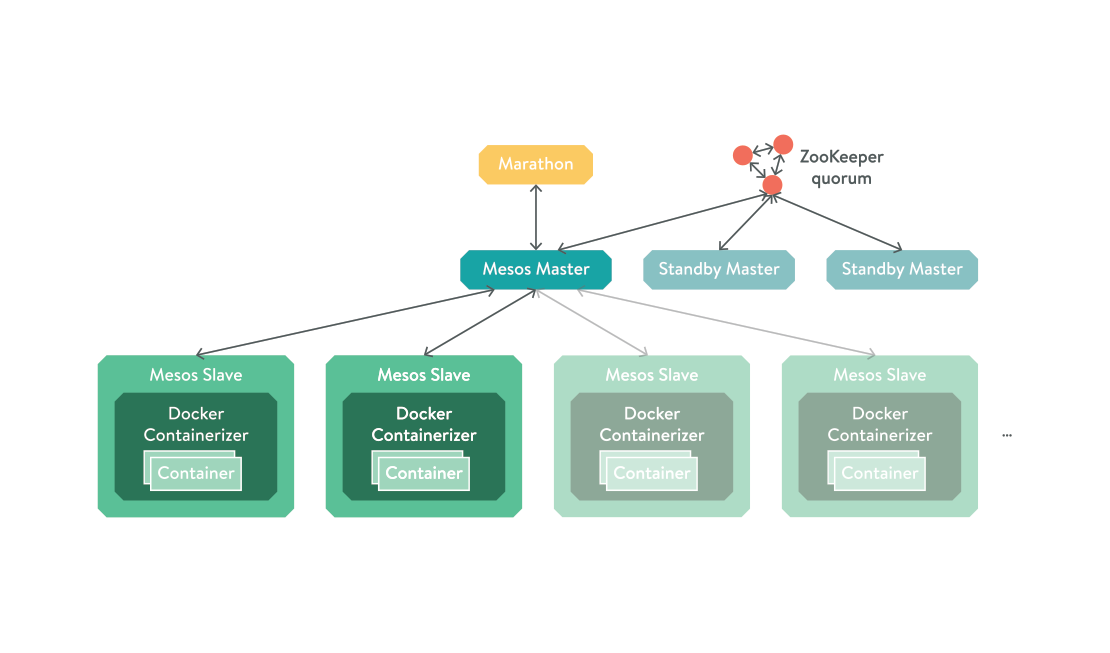 The Marathon framework is a process scheduler for long running tasks, similar to init or upstart, but designed for use on a Mesos cluster. While it has a web interface, at the time of writing you cannot create docker containerised tasks from it, so we have to create them by sending JSON files describing our application to Marathon's HTTP API. Here is an example configuration for nginx:

This example will launch 2 instances of the docker container "nginx:latest" somewhere on the cluster, and NAT a random port on the host to port 80 in the container. You can make sure they're running by viewing their tasks in the Mesos web UI.

Now we have several instances of our container running somewhere in our cluster, but we have no idea which physical host Mesos has launched them on, nor the ports it has chosen. The final piece of the puzzle is Qubit Products' Bamboo, which is a Mesos aware config file generator for HAProxy. Simply edit the address of ZooKeeper in their config file, and it will automatically discover all the services you have running on your cluster, and configure HAProxy to point at them! 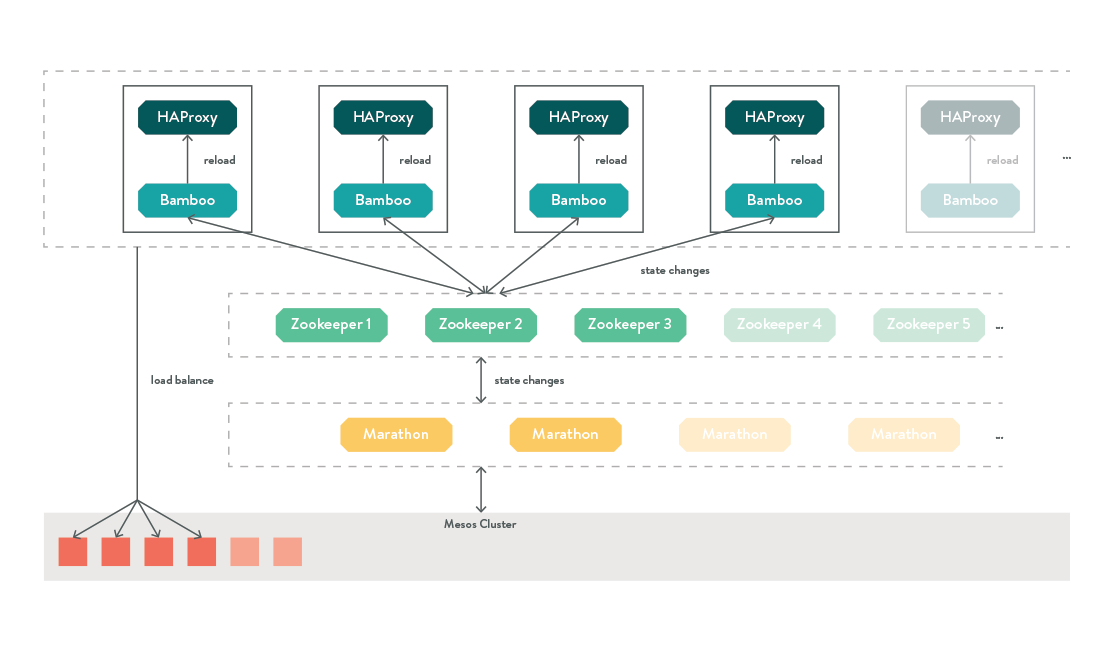 This article barely scratches the surface of large scale deployment. Real-world applications are not always able to be condensed into a single unit, and something like a database cannot be scaled up just by spawning more processes. In subsequent posts, we will explore various other technologies surrounding containers at scale, and examine solutions, pitfalls and best practices to splitting a complex application into discrete, scalable containers.